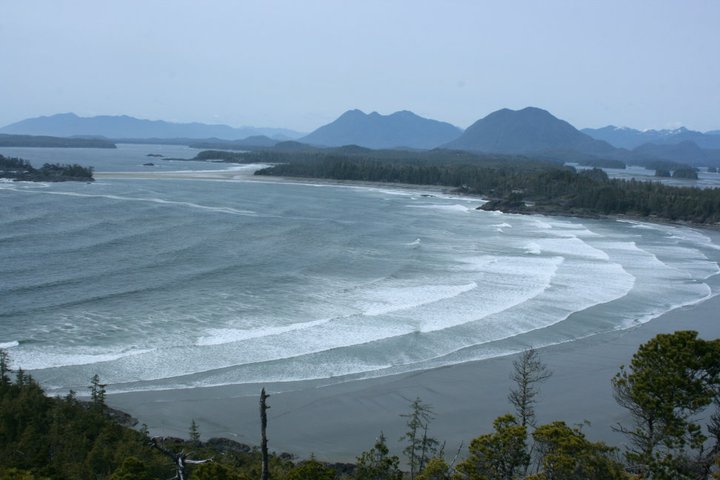 July 18th at 8:30 a.m., as the morning fog cover was lifting, a local surfer had a close encounter with a California Grey Whale. The whale surfaced at local surf break, Cox Bay and approached surfer and chocolatier Cam Shaw.

Cam initially thought it was a seal lion head popping up as all he could see was a undefined dark object.

“I was pretty far outside in the lineup. The waves were over head high today, so I was sitting deep as to not be caught off guard by an unexpectedly large wave.

I thought I saw a sea lion at first. It was just a dark shape on the surface of the water. It’s not uncommon to surf with sea lions in these chilly waters. I kept an eye on what I had seen, waiting for it to check me out even closer.”

He soon heard one of the girls surfing near by, yell, “Albert. Whale!”

There were approximately 5 other surfers in the lineup, including Albert Shepherd.
Albert is a whale expert from Friday Harbor that specializes in piecing together whale bones for museum exhibits.

“The whale did a mini spy hop and sunk straight back down into the water.” comments Cam. “It didn’t appear to be acting like a sea lion which I encounter frequently at local surf breaks. The next thing I saw was what I thought was a large dark fin. It came up, a few feet out of the water and then sunk back down. It turns out what I saw a fin was actually a tail fluke on it’s side. The whale kept coming closer until I could positively identify it. It gave a big blow and dove back down. The footprint continued to move towards me in the water and it came right up to me. It rolled over. I was within 4-6 feet of the whale. It was supremely magical. I’m a whale guy, I have the deepest appreciation of whales and I just about melted when he did a little pectoral wave above the surface of the water.”

“That’s the whale sighting of the year. ” said Albert Shepard

Grey Whales were just removed from the endangered species list in 1994 and are now plentiful in Clayoquot Sound. Many visitors come from all over the world for world class whale watching. This is interaction is a supremely unusual occurrence. The encounter lasted about 3 -4 minutes before the whale headed north towards Sunset Point.

Colouring Contest! Win some FREE PINTS OF GELATO for your Family or your Isolation Roomies!