The Big Year in Tofino: A Film Guide 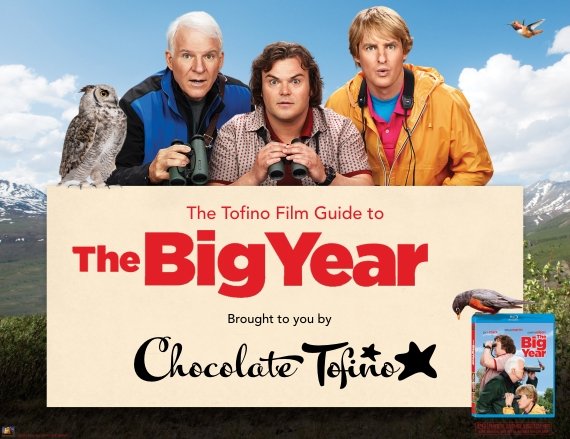 In May 2010, the cast and crew of The Big Year descended on the small Canadian surfing community of Tofino. The place was buzzing and many locals turned out for the casting call seeking Extras. Jack Black and Owen Wilson were spotted at the Long Beach Golf Course. Steve Martin and others were being served in local high-end restaurants. Signs and buildings were discreetly changed to better play the part in the upcoming motion picture. It was a fun time.

While The Big Year had many filming locations scattered across North America, such as Osoyoos, Atlanta, the Yukon, and the Dr. Sun Yat Sen Gardens in Vancouver, Tofino played a starring role as Oregon and other times it doubled as Alaska, California and Maine.

Watch the Official Trailer on IMDB.

The Fourth Street Dock – Where Fourth Street meets Main Street
Playing the part of Coos Bay, Oregon, the Fourth Street Dock makes a couple of appearances in the movie. When the birders board the Auklet Tour Boat, the boat is moored at the “B” Finger of the Fourth Street Dock. The second sighting occurs when the characters return during Thanksgiving. Although Tofino gets more than its fair share of precipitation, the film makers set up large rainmakers on a bright sunny day to film. Steve and Jack rush down the Dock in rain gear to get on an Auklet Tour, only to look at the bulletin board and realize that Annie is not running trips due to the holiday.

Storm Light Outfitters – 390 Main Street – www.stormlightoutfitters.com
After popping in for a quick take-out coffee, Owen Wilson and his birding companion get in their car outside of the store. Storm Light’s exterior is clearly shown and the camera gets a nice shot all the way down the length of Main Street.

The Pacific Breeze Motel – 750 Campbell Street
As you head away from the downtown core, you come across the Pacific Breeze Hotel and the Fisherman’s Net Restaurant. In the Theatrical Version of the film, it appears that Steve is staying here while trapped in Alaska after missing his flight and it shows the exterior of the Motel and the signage out front reading Alaska Breeze Motel. For the filming, they added a rusty Internet Sign. In the Extended Version of the film it’s shown with the real signage displaying the Pacific Breeze Motel as itself and has Jack (instead of Steve) staying in one of the rooms.

The Campbell House – 430 Campbell Street
This is the most minor of shots in the film, however it shows some of Tofino’s favorites. In a quick pan, it shows Breakers Deli, Habit Clothing, Pacific Surf School and in the background, Storm Surf Shop. If you look closely, you can also see Tofino Vacation Rentals on the signage.

The Arnet House – 336 Main Street
This waterfront heritage home, built in 1931, was the perfect location for Annie Auklet (Angelica Huston) to reside. The home can be seen in the scene where Steve Martin and Jack Black rush to her door on Thanksgiving. In the background behind Steve and Jack you can see the dark blue Tofino Legion building on the right of the screen. As well, the interior of the historical house is shown while Jack is on the phone with his dad and again in the film’s bonus features during the Thanksgiving Dinner celebration. (Off camera, this house is a personal residence so please respect their privacy.)

Cox Bay Beach – Maltby Road Public Access
Cox Bay was used briefly near the end of the film when Kenny Bostick and his buddy are shown with binoculars on a large beach labeled as Monterey, California. The defining detail in the film is the small but visible Pacific Rim National Park Boundary sign in the background amidst the large driftwood logs. This is a beautiful beach, has great surf and has hosted many surf contests including the O’Neill Cold Water Classic, the Rip Curl Pro, the Roxy Surf Jam and the Queen of the Peak. Leave your car at the Maltby Road public parking lot and walk down the 5 minute trail to the beach. Once on the beach, turn to your left and head down the beach to the National Park Boundary signage.

Rosie Bay
At the end of the film Jack and his new girlfriend travel to the East Coast for some more birding. The rocky headlands of Rosie Bay simulate the coast of Maine (as noted in the Extended Version of the film) however in the distance you can see the historical red and white Lennard Island Lighthouse which has marked the entrance to the Tofino Harbour since 1904. Rosie Bay is private property but is visible from the Sunset Trail on the North side of Cox Bay.

Outakes and Deleted  Scenes from the Special Features

The Schooner Restaurant – 331 Campbell Street – www.schoonerrestaurant.ca
Although relegated to the Bonus Features of the Film, this was one one of the more centralized and fun-to-watch filming locations. Steve Martin is seen in the second window of the upper dining room, watching Jack Black exit a convenience store across the street. If you’re a fan, ask for Steve Martin’s table-for-two when you make dinner reservations at The Schooner.

Co-op Family Fashions – 346 Campbell Street – www.tofinocoop.com
A lot of work went into converting the Co-op clothing store into Dunlin’s Mini-Mart only to have the footage end up on the cutting room floor. Co-op Family Fashions was replaced by a back-lit sign and the windows were set up with intricate food displays and fishing gear. Outside the store a USA Today newspaper box, a USPS mailbox and flashy drink merchandiserswere set in place to complete the look. In the deleted scene, Jack exits the Mini-Mart eating a bag of pretzels and peanut butter while Steve Martin watches from the Schooner Restaurant across the street. 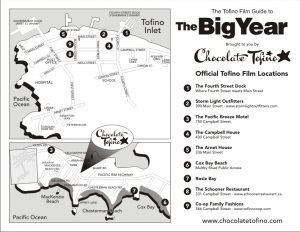 Colouring Contest! Win some FREE PINTS OF GELATO for your Family or your Isolation Roomies!